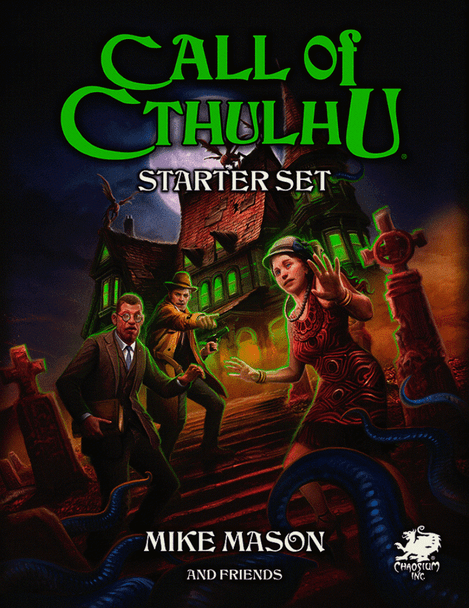 or make 4 interest-free payments of $9.50 AUD fortnightly with

A world of mystery, horror, and adventure in a box! This Starter Set contains everything you need to begin playing Call of Cthulhu - the tabletop roleplaying game of mystery and horror. Players take on the role of investigators of mysteries, uncovering dark secrets, encountering strange monsters, and thwarting sinister cults. Together, you and your friends create and develop a story in which each of your characters plays a leading role, which could be foiling some dastardly plot or stopping horrors from beyond space and time! Roleplaying games are a social pastime. Everyone works together in a team, each playing an investigator charcter. One player runs the game - the Keeper of Arcane Lore - who referees the rules and presents the story and adventure plots to the other players. Think of it a bit like acting in a drama, but where there isn't a script. Dice and the rules of the game determine the success or failure of your character's actions - all while you are propelled into dramatic and nerve-tingling situations. The emphasis is on having fun! --

Call of Cthulhu - Down Darker Trails

MSRP:
Our Price: $60.00
RRP: $76.00
Saddle up! Get yourself a posse together and have a look-see what’s over that hill. There’s strange rumors coming in from the whisperin’ desert. You’d best put a round in that...

MSRP:
Our Price: $68.00
RRP:
Calling All Heroes! It’s Time To Take The Fight to Cthulhu!Pulp Cthulhu is a game of two-fisted adventure, weird science, dark deeds, and brave heroes. With this book, some roleplaying dice,...

Call of Cthulhu: The Coloring Book

MSRP:
Our Price: $15.00
RRP: $17.00
“Artist Andrey Fetisov illustrates the madness-inducing horror of some of H.P. Lovecraft’s best stories, including “The Dream-Quest of Unknown Kadath,” “The Dunwich...

MSRP:
Our Price: $75.00
RRP:
Vampire: The Masquerade is the original and ultimate roleplaying game of personal and political horror. You are a vampire, struggling for survival, supremacy, and your own fading...

MSRP:
Our Price: $46.00
RRP:
Whether you’re training for your first mission at Xavier’s School or you’re fighting for survival against the villainous Magneto, there’s no better location for your battles...

MSRP:
Our Price: $52.00
RRP:
This 26" x 36" gamemat features both a backdrop of the world of Rokugan and beautiful, minimalistic templates that guide both players on where to place their cards during play. This not only enhances...

MSRP:
Our Price: $70.00
RRP:
This is a starter set for the official ALIEN tabletop roleplaying game—a universe of body horror and corporate brinkmanship, where synthetic people play god while space...